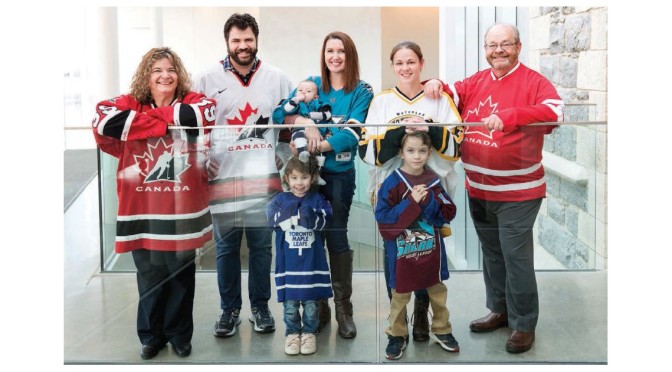 We were recently featured in a neighbourhood magazine. Thought you’d enjoy the article… 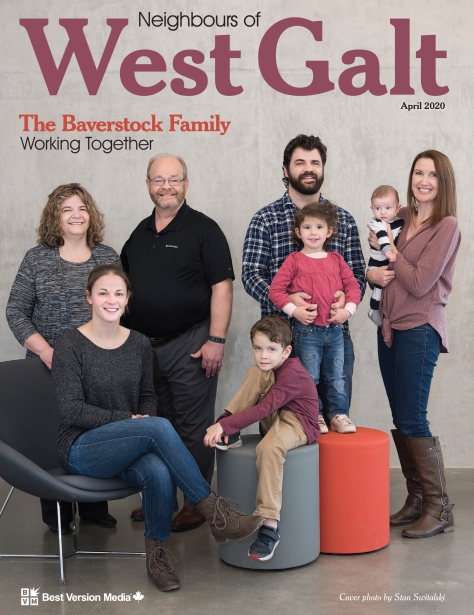 Whether you’re 14 or 40, when you meet your soulmate, you just know they’re the right one for you.

“Gary and I met at Glenview Park Secondary School in 1971, half-way through our grade 9 year,” says Debbie Baverstock, “and we were married in 1975.” 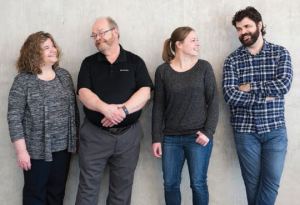 The Baverstock’s have been together for almost 50 years and have two adult children, Richard and Elizabeth.

When their children were younger, the family spent long hours at the ball diamonds where Richard and Elizabeth played t-ball and later softball, as well as at the arenas where they both played “between the pipes” – in goal – for their respective hockey teams.

Their hard work and commitment paid off, with Richard progressing to AAA, and Elizabeth playing Women’s Junior and varsity hockey at the University of Waterloo.

Elizabeth also practiced karate, earning a black belt, another sport where the family’s emphasis on hard work, commitment and perseverance paid off.

In addition to team sports, Richard was involved with the audiovisual department during his time at Southwood Secondary School.

“When there was an audiovisual problem at school,” recalls Gary, “the kids would chant “Baver! Baver!” to indicate that it was all down to Richard to remedy.

“One night there was a power outage during an assembly at the University of Guelph, and even though Richard wasn’t a student there, there were enough former Southwood students in the room that they started chanting “Baver! Baver!”.

Richard now lives in San Jose California, and has worked at Tesla for the past two years.

He graduated from the University of Waterloo in 2009 with a degree in computer engineering. While there, he had done one co-op in Africa, and the other in  California. The Californian company offered him a permanent position, and he left home two weeks after graduation.

“It was really hard to see him to,” says Debbie with a sigh, “but we Skype regularly, and manage to visit once or twice a year.”

When I met with them, the family was about to have a birthday barbecue – via Skype – for Richard and Clark, his son, who was born on Richard’s birthday.

“We’ve grilled hamburgers for Richard’s birthday since he was a boy,” says Debbie, “so distance isn’t going to stop us.” 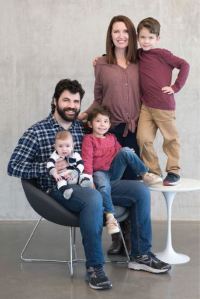 Richard met his wife, Tristan, in California, and now they have three young children, Clark, Nicole, and Maverick, as well as a dog, Rocky.

“The whole family was here at Christmas, and the kids enjoyed playing in the snow – there’s none of that where they live in California,” explains Debbie.

Elizabeth graduated from Conestoga College with a diploma in recreation and leisure service, and subsequently from the University of Waterloo with a degree in applied health sciences.

She then went on to receive her Bachelor of Education at Redeemer University and Elizabeth is now a teacher at a school in Breslau. She enjoys teaching while coaching the track and field team and field hockey team.

“She loves working there, it’s such a beautiful campus,” says Debbie.

Gary and Debbie, the Baverstock Team, have been in the real estate business for over 30 years, during which they’ve often been privileged to assist several generations of the same family.

“In business and in life, we follow the Golden Rule,” Gary says. “Treating others as we would wish to be treated builds strong relationships.”

Running a business with your spouse can be a challenge, but Gary and Debbie make it look easy.

“We’ve been in business together since high school,” explains Gary, “when we operated a lawn and yard care business. We’ve always enjoyed working for ourselves, and working together.”

Gary and Debbie sparked some consternation in 1977 when they announced to their families that they were moving across the river from East Galt to West Galt.

“They didn’t know why we’d want to move ‘all the way over there,'” laughs Debbie.

They purchased their first home on Grand Ridge Drive, then, in 1986, they built their current home in the same neighbourhood.

“We bought the lot, and I met with a friend who had recently built his own house,” says Gary. “The more we talked, the more I realized it was what I wanted to do.”

“It was a lot of work, though,” continues Debbie. “Richard was a baby then, but Gary would be over working on the house until well past midnight.”

Location, as they say, is everything when purchasing a home, and they have found this neighbourhood to be ideal.

“It is very quiet because it is a loop street so there is no through traffic,” explains Debbie, “and we often see wildlife, such as rabbits, raccoons, skunks, deer and even fox on occasion.

“We are within walking distance to the three schools that our children attended – Tait Street, St. Andrews, and Southwood. All three schools were fantastic for our children, and we feel very safe in our neighbourhood.”

When the children were younger, their annual vacations usually consisted of camping at either Port Elgin or Sauble Beach. Trips further afield included Disney World, Myrtle Beach and Jamaica.

More recently, Gary and Debbie have made several visits to San Jose to visit Richard and his family.

They have reached a stage in their lives when, for others, retirement might be beckoning, but Debbie has other plans.

“Debbie says she’ll consider it when I’m 104,” says Gary with a chuckle. “Until then I’ll be doing what I love, taking care of my customers as if they were family.”

Working hard is such an integral part of their lives that they see no need to slow down just yet.